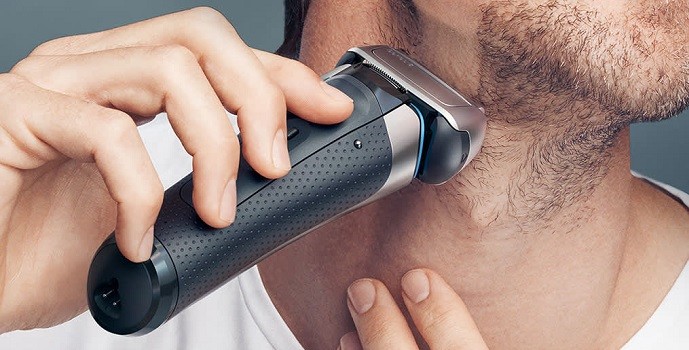 Brought to market in 2019, Braun Series 8 shavers are the new kid on the block, packed with intelligent technology that drives their close-cutting performance.

Does this premium men’s foil electric shaver hold its own against the well-established Series 5, 7, and 9 shavers? Scroll down to read our full review!

As with other Braun electric shavers, the Series 8 8390cc features three blades – two rounded, micro-perforated OptiFoils that sit on the outer edges of the shaver head, and a middle trimmer, whose revered flat shape and alternating, vertical zig-zag pattern help capture and cut long, flat-lying hairs in fewer passes.

Within each Series are various models with slight feature differences, but you’ll notice that all the “Series” shavers are an odd number – it’s been that way for many years now. To see this Series 8 appear as an even number, slotted between the models 5 and 7 is very intriguing.

From my observation, it appears that the Series 8 is most similar to Series 7 in terms of features. When you look at all the Series shavers lined up, the Braun Series 7 always looked like the odd one out, simply because of its appearance.

The Series 8 has the same pop-up trimmer, shaving elements, and motor performance compared to the Series 7, but the Series 8 has a longer-lasting battery and more detailed display. In my opinion, the Series 7 has always been an oddball of the bunch, and I’ve never liked the design.

The latest Braun Series 8 electric shaver is like a much-improved version of the Series 7, in terms of performance and aesthetics.

If you’ve ever cut yourself using a manual, fixed-blade razor, you’ll appreciate the flexible shaving head on the Braun Series 8 8390cc – it swivels up and down, and the three shaving elements move independently of each other. That means less pressure on your face, and a greatly minimized risk of irritation from over-shaving.

The Series 8 8390cc works quickly, powering through facial hair with a blazingly fast, 30,000 cutting actions per minute. Often, that kind of speed means a loss of precision. Here, no such sacrifice is made: Braun’s new electric shaver cuts as close as 0.05mm, leaving you with smooth, stubble-free skin.

Sonic vibrations reduce friction and help capture even more stubble. This feature combined with the high performance cutters make this a very good choice for shaving with sensitive skin, and a thumbs up from the Skin Health Alliance gives further reassurance that your using an electric shaver that’s designed with skin comfort technology.

Versatile Shaving: Use it Wet or Dry

The Braun Series 8 8390cc is 100 percent waterproof. That means you can use it dry, for a quick, close shave – or for the ultimate in comfort, wet, with water or your favourite shaving product.

Though we recommend using the included Clean & Charge Station (more on that later), the 8390cc can also be easily rinsed clean under running water.

The brains behind this Braun are found in a new, 32-bit MCU (microcontroller unit).

Essentially a small computer, the MCU controls motor speed and other necessary functions – and intelligently adapts power output relative to your beard density. The end result is better shaving performance, and reduced wear and tear.

Included with the Series 8 8390cc is Braun’s popular Clean & Charge Station, which automatically selects the cleaning program, and cleans, lubricates and charges the shaver with one touch of a button.

Hands-off maintenance is a great time-saver, and keeps the 8390cc hygienic, and running at its most optimal. The only downside is having to pay for Clean & Charge refills—but the convenience more than makes up for it.

It’s a simple feature, but you’ll probably wonder how you ever went without it: a travel lock prevents the power button from being accidentally engaged. That means no risk of draining the battery or damaging your luggage when you’re on the go.

A simple, five-bar indicator, positioned on the shaver handle, lets you check the battery level at a glance. The buttons on the Braun 8390cc are large and easy to press, even when wet.

A generous portion of the handle is covered by a textured, rubberized section that improves grip. Knurling – as opposed to the small dots Braun used – might further enhance grippiness, but we have no real complaints here. The Series 8 8390cc is well-designed, with a rounded, flared shape that fits comfortably in your hand.

A newly improved, higher capacity, rechargeable lithium-ion battery provides up to 20 percent more runtime than Braun Series 7 Shavers. It may not sound like a lot, but it’s roughly the difference between 45 minutes and a full hour.

That means more shaves on a single charge. And should you ever forget to recharge the shaver (it happens to the best of us), the five-minute quick-charge feature will have you up and running in no time.

Quiet Operation For Those Early Mornings (or Late Nights)

We’ve yet to find a completely silent electric shaver, but the Braun 8390cc is reasonably quiet, occupying a middle ground between Series 7 and Series 9 models. It’s still no match for very quiet-running rotary shavers, but isn’t too bad at all in the noise department.

Let’s recap what makes the Braun Series 8 8390cc a great electric shaver—and briefly touch on what we think could have been done better.

The shaver can be used wet or dry, and with or without foam or gel.

Rounded foils and rapid micro-vibrations allow the shaver to glide over skin, which makes for a very comfortable shave.

An improved battery gives you twenty percent better runtime, and the travel lock prevents the 8390cc from being accidentally powered on.

Operation is reasonably quiet, and cleanup is easy—even more so with the included Clean & Charge station.

The Braun Series 8 8390cc is fairly priced – it’s not a budget shaver, but is more affordable than some costlier offerings of similar standing.

The Clean & Charge station takes up extra counter space, and replacement cartridges are an expense that you have to take into consideration.

As compared to Series 7 shavers, the 8390cc has a different balance in hand that may be slightly more fatiguing to use. (Though that is very subjective.)

Apart from a few minor complaints, the Braun Series 8 8390cc is an excellent, mid-priced, premium foil shaver. It’s well worth considering, either as a first electric shaver or if you’re looking to upgrade from an older Braun.

It holds the same high-level performance as the Series 7, but with some much-welcomed enhancements.