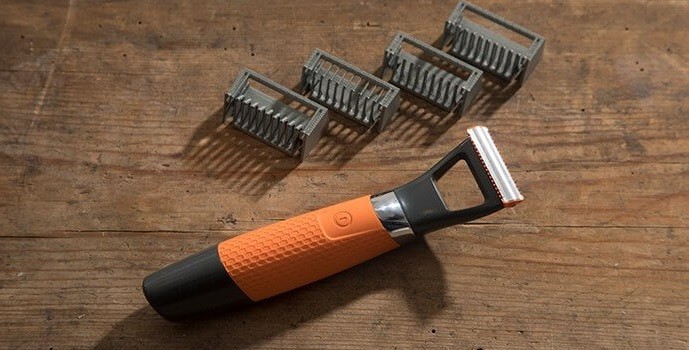 When you first look at the Remington Durablade MB050, you can’t help but notice how similar it looks to the Philips OneBlade. In fact, when you compare the blades – or cutter – they look almost identical.

We believe the Durablade was inspired by the Philips Oneblade, but does this mean that it’s in any way inferior?

In this review of the new Remington Durablade, we’re going to take you through all of its functions and design, and see how it stacks up against the OneBlade.

Snapshot of What the Durablade Has to Offer

The concept behind the design of the Durablade is that it looks and feels like a manual razor blade, but its blades are electrically powered – it’s a powerful, electric shaver and hybrid trimmer, rolled into one.

The handle looks very smart, with a bright orange slip-resistant grip, and comfortable shape to hold, and sturdy construction. The shaver works great when shaving with or against the grain of hair growth, and because of its comfortable design, you’re able to trim and shave with accuracy.

It can be cleaned easily by rinsing under running water, and because of the waterproof design, you can use it to wet shave or use it in the shower.

The Problem with Shaving and Remington’s Solution

Think of some of the main drawbacks concerning your typical wet shaving routine.

Things like time consumption, messy foams and creams, expensive blades, and skin irritation are probably the main four that stand out.

Well, the Remington Durablade has been designed to tackle these problems, head-on.

First, it cuts through hair like a hot knife through butter, and you don’t have to stop after every other stroke to rinse the razor blades because they’re clogged up with soap and hairs – unlike your throw-away manual razors, that isn’t a problem with the Durablade.

And because you have the freedom to use this shaver with or without shaving foams, a quick dry shave without the mess and hassle of cleaning shaving lubricants off your face and from around your bathroom sink is possible.

Like most things in life, shaving costs money, and when it comes to shaving, your biggest expense is having to replace blunt, worn-out blades. These blades aren’t cheap, and monthly costs can hurt if you’re on a tight budget.

Not with the Remington Durablade, because its blades never need replacing. That’s right, the cutting elements are “everlasting” so you never need to worry about dull blades painfully tugging on hairs, and you can score that pack of replacement blades off your shopping list, for good.

The blades that the Durablade uses to cut, are like a scaled-down hair clipper, but very sharp and able to effortlessly glide through hair. Its dual-sided cutter is able to trim down a thick beard, using the various stubble combs, all the way down to a clean-shaven face.

This single cutting head allows the user so much grooming versatility;

Trim: You can maintain a beard or trim down to create an even designer stubble look, by using the 4 length combs (1, 2, 4, 6mm lengths). It acts just like a precision beard trimmer.
Edge: You can accurately shape and style the edges of your stubble or beard with the dual-sided blades – it works like a super trimmer.
Shave: You can get a close wet or dry shave, every day. The shave is close, but not enough to cause razor burn, or cuts, as you’re not dragging a sharp razor blade across the skin – it cuts just above skin level, which can also help reduce the risk of ingrown hairs.

The Remington Durablade MB050 comes with an internal rechargeable Lithium Ion battery that’s powdered by a supplied, mains operated charger. When the battery is fully charged, it holds about 1-hour usage, and charging the empty battery can take up to 4 hours.

What’s in the Box?

It’s early days for the Durablade, as reviews are quite thin on the ground. It takes reports from multiple users over a long period of time to build a clear picture as to how good it really is.

With that said, most feedback coming in is looking positive. Some people report that it doesn’t give a close enough shave, and if you’ve been wet shaving with a disposable razor for years, then no, this won’t give as close a shave as you’re used to currently.

The Philips OneBlade on the other hand has been around for a while now and has gained a ton of positive reviews on its shaving effectiveness and reliability.

The Durablade is Remington’s answer to the popular and praised OneBlade, it looks much alike and is marketed in the same way, but with different styling.

It’s not quite as slick as the Oneblade, but it does have one advantage in that the Durablade blades never need to be replaced, whereas OneBlade needs replacing every 4 months or so.

At around the same price point, it’s worth consideration as with the Philips OneBlade, but time will tell as we hear more feedback to see if one is better than the other.