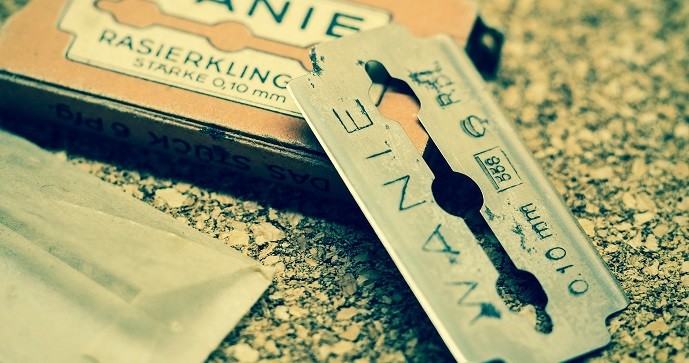 Don’t let anyone tell you that grooming and taking care of your looks is reserved for women.

Talking about shaving, hair, and skin care products might not be “manly”, but these things matter to men more than ever.

It’s 2017 and the metrosexual man has arrived, like never before. Though growing beards and keeping the chest hair had their fair share of the limelight, a clean-shaven look will never lose its charm.

You only have to look at the popularity that Brad Pitt and George Clooney’s clean-shaven faces attract to acknowledge that we have a very valid point!

Grooming and shaving have had a place in the daily routines of man since prehistoric times, with the first razors made of flint dating back tens of thousands of years.

Luckily for us, civilization’s come a long way since then, with the advent of many razors that are far easier to use and far more effective, such as straight razors, double edge safety razors, electric razors, cartridge razors and disposable razors.

Today, we take a look at straight and double edge safety razors, clearly differentiating between the two.

Let’s Get It Straight! What Are Straight Razors?

You’ve probably seen your grandpa or dad (depending on your age) use this. Or, if you’ve ever watched “Sweeney Todd” or even ever closely observed Mammy’s pockets on “Tom and Jerry”, you’ve seen what a straight razor is!

Straight razors were one of the first types of razors to be invented, resembling a knife due to the long, straight metal blade attached to a pivoting handle.

Though beaten in popularity these days by other types of quicker and easier-to-use razors, straight edge cut throat razors were the only option available for shaving till the invention of the safety razor.

Today, these razors are only used by professional barbers or those with a penchant for the “antique”.

Though old school, straight razors can give you one of the cleanest possible shaves. However, a high degree of skill, patience and care is required while using these bad boys, because when we say they resemble a knife, we don’t just mean in physical appearance.

The sharp blade needs to be handled with patience and care and unless you know how to use them, straight razors could literally make you the next “Scarface”.

What, Then, Are Double Edge Safety Razors?

First patented in the late 1800s and available to the public since 1904, double edge safety razors are more commonly used than straight razors.

So called because of their double-sided shaving facility and the presence of a protective device between the blade and the skin, double edge safety razors, also simply called safety razors, gained popularity as they enabled men to reduce dependence on their barbers and shave reasonably quickly without scarring their faces.

Though safety razors may resemble the modern-day cartridge and disposable razors, they are almost always entirely made of metal, as opposed to plastic like the latter two.

What Are the Differences between the Two?

Though both safety razors and straight razors obviously help you achieve the end goal of shaving, there’s a world of difference between the two in terms of their looks and their usage.

Let’s take a look at the differences between the two.

Why Straight Razors Are a Great Pick

Straight razors are highly sturdy and well made, having always been made with premium quality wood and metal.

Even now, though they are slowly regaining their popularity, straight razors are still of premium quality, helped in part by their “antique” status and the lack of their mass production.

Though this means that they could be a slightly pricey investment, they’re well worth the dollars you shell out as these blades are highly durable. All you need to know is how to “hone and strop” (sharpen and polish) the blade and you’ll never feel the need to replace your straight razor.

Due to their exclusivity, you could also have a straight razor customized just for you, with a blade length and handle that suit your grip and appeal to your visual sensibilities. Also, unless you’re allergic to the steel used, straight razors are also gentler on your skin, resulting in lesser rashes and razors burns.

Why Straight Razors May Not Be Your Thing

Just like Harvey Dent has two sides to his face, so do straight razors. Though straight razors have an inherent – “cool” or “manly” or “badass” or [insert macho word here] – feel about them, insufficient practice and care could result in artwork (and not of the good kind) on your face.

They also require much more time than normal disposable and cartridge razors, both in terms of shaving as well as caring.

Regular cleaning, sharpening and polishing are highly important to protect your blade as well as your skin, as a dull razor can do more harm than good for your skin. In order to keep your razor in good condition, you need a strop and polishing cloth, which may sometimes be an additional expense.

With that said, there are straight razors that take replaceable blades that don’t require maintaining or sharpening.

Why Safety Razors Are a Good Pick

Though they may not be as classy as straight razors, safety razors really are the safer choice.

These razors give you a closer and cleaner shave as compared to straight razors, with lesser practice and in half the time and half the injury rate! And unlike straight razors, you can simply replace the blade when either side gets dull, instead of putting in the effort to sharpen and polish it.

Due to the disposable nature of their blades (they last you a week if you’re shaving every other day), these razors are much cheaper than straight razors or even cartridge razors.

Overall, these blades also leave your skin feeling great, with lesser irritation and a lesser chance of ingrown hairs.

Safety Razors: Not All That Safe?

Well, to answer our own question, safety razors really are quite safe! In fact, the only disadvantages you could face with safety razors is that they can bore a hole in your savings in the long-term, as the blades need to be frequently replaced.

Even the handle may rust and warrant replacement, whereas straight razors last you a lifetime.

Also, it’s important to remember that these razors don’t completely eliminate the possibility of cuts and nicks; they only reduce it, so you still need to focus while shaving. Any time you have anything sharp near your skin, you risk getting a cut, it’s pretty much impossible to avoid such a scenario.

Though both straight and safety razors are great for wet shaves, the choice really is dependant on your time and effort. It’s clear from the outset that straight razors require a lot more time, effort, practice and care in not just shaving, but also caring for your razor, whereas safety razors require much less practice and care in both shaving and caring for the razor.

Also, straight razors may result in more nicks and cuts, and are more tricky to get that hang of using, while safety razors are the go-to items for clear and irritation-free skin, as well as a closer easy shave.

That being said, straight razors win over safety razors in terms of their durability, quality and class.

Though they may seem like a heavy investment initially, they really are worth it as you’ll never need to replace them given the right care. If you’re someone who has always enjoyed your grooming sessions and have the time and patience to dedicate to learning how to use them, nothing gets better than straight razors.

Ultimately, it all boils down to what you want to go through when you shave and what you expect from your grooming. And now that we’ve given you a concise comparison, hopefully the decision is clearer.