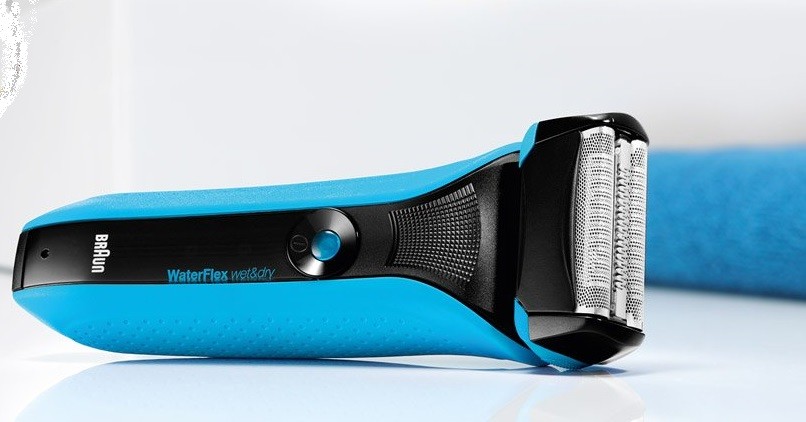 Braun – well known for their high-quality personal grooming products – has created an electric shaver that provides the well-groomed man with the best of both worlds – wet or dry shaving, all in one device.

This shaver is discontinued.

Please see the Braun Series 5 as an alternative.

Wet shavings entails applying lather to your face prior to shaving, either above the sink or in the shower; dry shaving – made possible by electric shavers like the WaterFlex WF2s – lets you shave quickly, sans lather, when you’re in a hurry.

In either case, this Braun shaver has got your back… err, make that your face – so keep reading this review to learn more about the most important features!

Designed with Maximum Comfort in Mind

An electric shaver, like any tool, has to be comfortable to use – it can’t be bulky, awkwardly shaped or easily dropped. Braun is known for taking an ergonomic approach to design, and I found the WF2s had both a reassuring heft and a shape which allowed my fingers to wrap around it – though it was small enough that using it wasn’t a chore.

I was a bit concerned about dropping this shaver in the shower – water, soap and lather make for a slippery combination – but there was nothing to worry about. The non-slip, textured grip areas and large button were very easy to hold on to and operate.

Gentle on the Skin

Okay, so the WF2s is comfortable to hold – but what about the shave? Like many men, my face has a few troublesome areas – the skin is sensitive, there’s an odd bump here or there and the growth pattern of the hair is unpredictable.

I found the swivelling head on the WF2s allowed the shaver to simply follow the ups and downs of my face, jawline and neck instead of having to force it in any direction. Even hairs that normally take several passes with a regular razor were shorn clean off in a couple of strokes. The shaver head pivots by as much as 33° – it should work for just about any man, regardless of their unique “facial topography”. If you’re prone to shaving rash around the neckline this could be the shaver to remove that problem from your shaving routine.

Advanced Shaving Technology in the Palm of Your Hand

The Braun WaterFlex packs an impressive amount of technology into its body, starting with the IPX7 rating. IP, in this case, stands for Ingress Protection, and the number following denotes how waterproof a rated device is.

The WF2s shaver’s rating of 7 means it can withstand being submerged under a full metre of water, making it perfectly safe to operate in the shower, and possible to rinse off under running water – something I found very convenient.

Braun has been designing electric shavers for more than five decades – their new WaterFlex uses what they call an OptiBlade foil. “Foil” refers to the thin metal layer which traps facial hairs within its micro-perforations and covers the moving blades. The advanced OptiBlade foil captures hair better than previous generations of shavers, providing a faster and closer result.

One thing you might have noticed is that a slightly shorter beard is easier than a longer one to cut (or vice versa, depending on the nature of your facial hair). But the WF2s uses a three-stage system that cuts hair well regardless of length – it even tackles sideburns and can trim moustaches and beards instead of fully shaving them off – all you need to do is slide the trimmer attachment in an upward direction.

Gone are the days of nickel-cadmium batteries. The Braun WaterFlex WF2s uses a high-power 3.6V lithium ion battery which doesn’t suffer from the dreaded “memory effect” that causes inferior battery types to lose capacity, and it charges in only 1 hour, providing up to 45 minutes of runtime. If you’re in a hurry, even a 5 minute quick-charge can top up the battery enough for one shave. The 2-stage LED display shows battery status at a glance.

A portable electric shaver wouldn’t make much sense if it couldn’t be used anywhere you went – luckily, the included universal SmartPlug accepts voltage from 100V all the way up to 240V – letting the WF2s be charged and operated anywhere.

Braun’s WaterFlex WF2s Wet and Dry Shaver is not inexpensive – but the quality such a price commands is evident in fit, finish and performance. If you’re contemplating the switch from manual shaving to electric – or just looking to upgrade your old shaver – consider the WF2s.