How to Stop Shaving Cuts from Bleeding 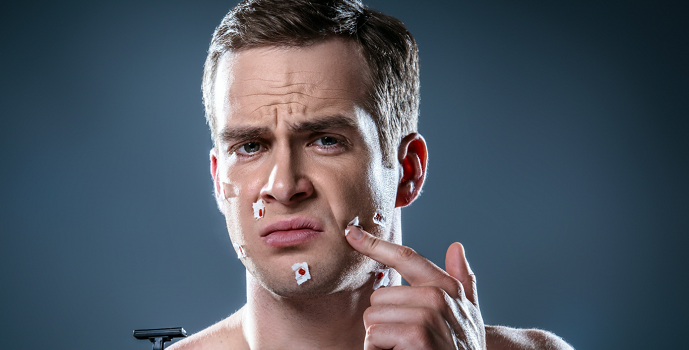 There’s nothing like a smooth, close shave – and nothing to ruin it like a nasty shaving cut.

Nicking yourself whilst shaving is practically a rite of passage, but that doesn’t make it any less annoying.

Luckily, it’s possible to stop a shaving cut from bleeding in the nick (sorry about the pun) of time. In fact, we’d go so far as to say that it’s bloody easy (sorry again) to do, so read on!

A word of advice; if you’re cutting yourself every time you shave, or more often than not, then you need to take a look at your shaving technique and tools. Nick and cuts that bleed can be normal, but they shouldn’t happen all the time.

If your bleeding cuts are happening from the use of cartridge or safety razors, then it might be time to switch to an electric razor to eliminate cuts, while still achieving a close smooth shave that you’re used to.

First, a word about toilet paper: Stop using it (on your face, that is).

Messy and short-lived, it’s borderline useless for staunching the flow of blood.

Having gotten that out of the way, let’s explore what does work to put the kibosh on shaving cuts.

Normal antiperspirant, by which we mean the basic, bog-standard stuff (not spray aerosols – roll-on). It usually contains one of the two following ingredients: aluminium chlorohydrate or aluminium-zirconium tetrachlorohydrate gly. Note that most natural deodorants – which aren’t intended to reduce sweating – contain neither of the aforementioned substances.

Petroleum jelly – found in vaseline, many lip balms, and other products for dry, chapped skin – creates a hydrophobic barrier, preventing blood from running down your face. Hint: emulsified beeswax, also found in some lip balms, ointments and salves, reduces bleeding in the same manner.

Ice cubes – they don’t work instantly, and are a bit messy – but if you have a few minutes to spare, the consistent application of ice to a shaving cut will cause localized vascular constriction – in other words, cold temporarily shrinks blood vessels near the surface of the skin, reducing blood flow. This is quite possibly the coolest way (ha) to stop a shaving cut from bleeding – and numbs the area, reducing pain.

Astringents such as witch hazel and recently steeped tea bags – particularly black tea, which is rich in astringent tannins – naturally tighten and draw together skin, reduce blood flow and coagulate protein. Having a morning cuppa while you shave might not be such a bad idea after all…

Alcohol-based mouthwash is well-known for its mouth-puckering sting. The active ingredient – alcohol – acts as an astringent, albeit one more painful to use than witch hazel or tea leaves. On the upside, your shaving cut will smell minty fresh.

When Nothing Else Works

Sometimes, home remedies just don’t cut it (…my puns are on fire today). That’s when it’s time to bring in the heavy hitters.

Did you try the antiperspirant trick?

Then consider an alum block. Made entirely from aluminium sulfate or potassium alum, alum blocks reduce bleeding and razor burn quickly and effectively.

Or, invest in a styptic pencil – though given how little they cost, you might as well buy three – one for the bathroom, one for your dopp kit, and a third to spare. Styptic pencils contain pressed, powdered anhydrous (water-free) aluminium sulfate or titanium dioxide.

When powdered, these minerals quickly penetrate pores, arresting blood flow at the source. Furthermore, the elongated shape of a styptic pencil allows for precise application.

Shaving with an old razor blade is like cutting food with a dull knife – the razor’s edge drags, snags, and removes hair only with excessive force, catching and nicking the sensitive skin on your face.

One of the easiest ways to prevent shaving cuts is to regularly replace your razor blade or cartridge. Just remember – a new blade requires little pressure, so use a light touch!

The addition of a natural shaving oil – a few drops on warm, damp skin will suffice – moisturizes and protects, creating a low-friction cushion between razor and skin, allowing the blade to glide rather than drag.

And the importance of using a good-quality shaving cream, gel or soap cannot be understated. Higher-end shaving products produce a thick, rich, long-lasting lather that traps moisture and protects skin.

Finally, remember to cleanse your face before shaving, and move the razor with or across the grain.

Finish off with cold water, and if desired, a non-irritating aftershave or balm.

We hope our guide to treating and preventing shaving cuts has been of help! Bear it in mind, an electric shaver such as the Braun Series 3 might be than answer to ending shaving cuts and getting yourself back to enjoying the feeling of a smooth, painless shave.